In 1879 the Parish of St. Joseph was founded as a mission project of the parish of St. Mary’s in West Point and from then until 1893 the parish was served by the priests from St. Mary.

In 1893 St. Joseph became an independent parish. That same year, a new frame church was built at a cost of $1,200.00 and was heated by two coal heating stoves. Obviously, fans were not available during the summer and people reportedly would often faint. The choir loft was small and only a few steps above the rest of the pews. The Murphy men, McGuire men, and John Flemming Sr. rendered a lot of beautiful music from that small area. Mrs. John Flemming Sr. and Mrs. Arland Wells, (sisters) were the organists. Miss Bly Flemming (McGill) also played the organ.

During the pastorate of Father Joseph Rose, it was decided that a new church should be built. On a brisk fall morning in the 1920’s the lot on the corner of 13th and G streets became the scene of great activity. Farmers arrived with their horses and wagons loaded with plows and scrapers to assist moving the ground for the basement. Father Rose was a master in architecture. With the help of Karl Noe, they instructed their co-workers on the big job ahead of them. Mr. Michael McNamara turned the first shove of dirt, then many parish people volunteered their help and money.

R. P. McGuire also played an important role in this major project. After the foundation walls were in place, the cornerstone, dated 1924 A.D. was laid into place by Mr. William Murphy. Many visiting priests and parishioners

were assembled for this very special occasion. The building was soon finished. It is of Gothic design, of light brick, and stands clearly visible for many miles. The beautiful stained-glass windows were imported from Italy.

Father Rose retired in 1953 and lived in Utica until his death in 1960. He is buried in the Parish cemetery in Wisner where a Mass table was erected near his grave. 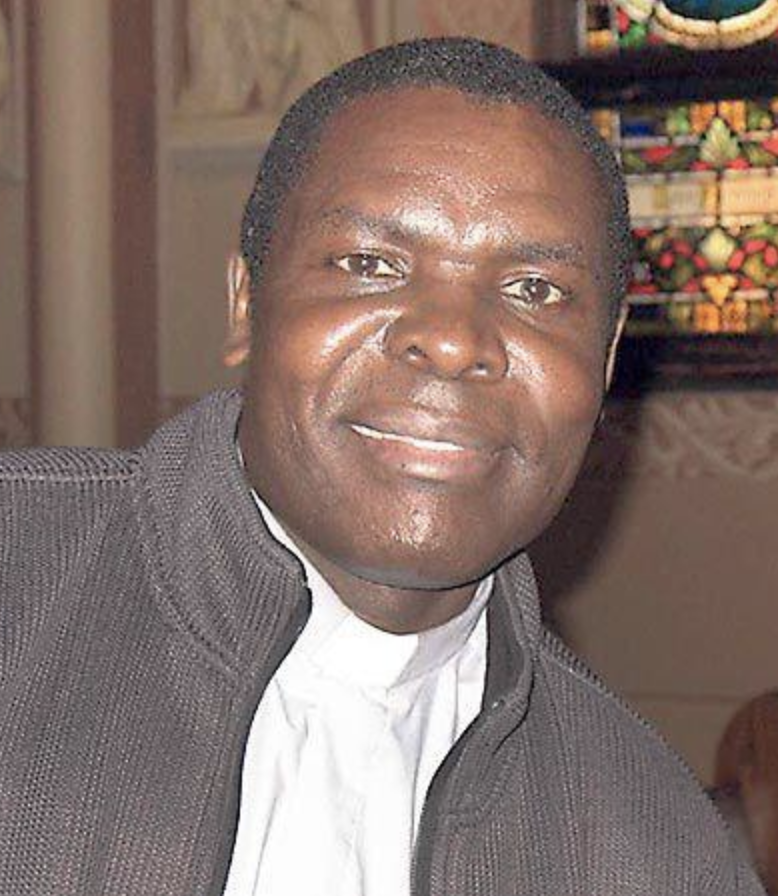 I’m a native priest from Kenya. In November 2011, I came to the USA for studies while residing at St. Mary Magdalene parish in Omaha NE as in resident priest. In 2012, I was appointed as an associate pastor in the same parish. On completion of my studies in 2015, I got a new appointment to work as associate Pastor at St. Margaret Mary in Omaha, NE until 2018.

2018 – to date, I moved to the upcountry as Administrator at St. Joseph Church in Wisner and Holy Cross Church in Beemer.

My apostolate duties in my two parishes include: Celebrating Masses for the people in week days and Weekends, doing weddings, baptisms, funerals, visiting and teaching CCD on Wednesdays, visiting the homebound and the sick in homes and hospitals among other ministries. I also visit and say Mass at Wisner Care Center and Colonial Haven care center in Beemer.

Apart from parish work, I do have teaching duties at Guardian Angels Central Catholic High school (GACC) in West Point during the weekdays.

The faithful family members and friends of St. Joseph Catholic Church who have departed this earth have moved in hope from this pilgrim church into the triumphant Church to be with our Lord. This is the faith we all profess every Sunday when we go to Church. We therefore entrust all our dear ones who have gone ahead of us into this St. Joseph Catholic Cemetery in anticipation of their entry into eternal Glory.

The St. Joseph cemetery is located in the southeast corner of the Wisner Cemetery and overlooks the beautiful Elkhorn River valley.  The cemetery is nicely manicured and provides a serene final resting place for loved ones.

Each pastor has a consultative team that he works with to run the parish. Thus, the Parish usually has a Pastoral Council commonly known us Parish Council that comprises of the president, the vice president, the secretary, and 3 other members. Other representatives of various groups can attend the meeting, but they do not have any vote on any parish council matters. Leaders on the council are elected by the parishioners or appointed by the pastor and run for a term of 3 years. Any parishioner is welcome to attend our meetings at any time but cannot vote on any matter.

Our parish councils meet every other month unless otherwise.

Our current presidents are:

Each parish has Finance committee or council who comprise professionals in Finance matters and their role is to assist the Pastor and the Parish council members in making wise decisions on parish stewardship.

Each of our parish has 5 members of Finance committee that are appointed by the pastor and meet quarterly in a year.

Our Current Finance Chairs are: